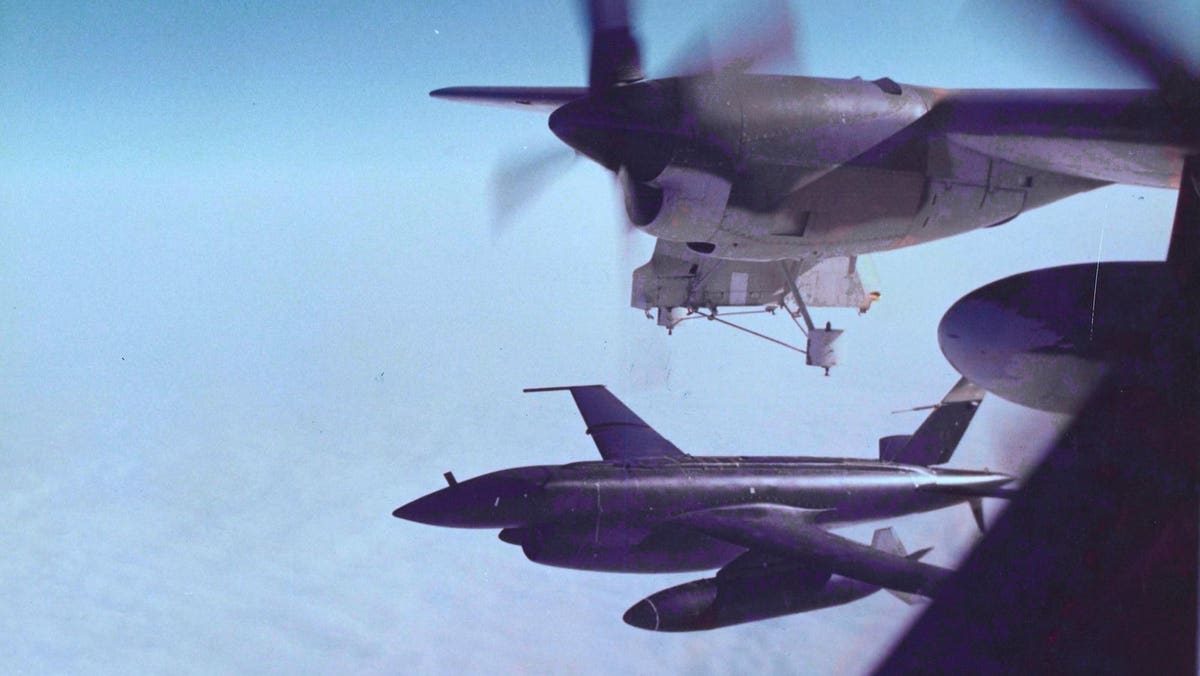 On Oct. 7, 2001, a U.S. Air Force MQ-1 Predator drone flying over Afghanistan fired a missile at a building CIA analysts suspected of housing Taliban leader Mullah Omar. The Predator missed and instead struck a vehicle, killing several of the mullah’s bodyguards.

The botched Predator strike was hardly the first time U.S. military and intelligence agencies had sent aerial robots into battle. As early as World War II, the military tinkered with remote-controlled bombers.

The Soviet-supplied, Soviet-staffed and Soviet-led North Vietnamese S-75 batteries entered combat on July 24, 1965, when two batteries of the 236th SAM Regiment near Hanoi fired on a flight of U.S. Air Force F-4C fighters, shooting down one jet.

But regiment commander Col. M. Tsygankov anticipated the attack. He dispersed his batteries, replacing them with dummy launchers and surrounding the dummies with 120 anti-aircraft guns.

A few weeks later in August 1965 the Navy blundered into a similar ambush, losing five planes during a failed raid on an S-75 regiment.

The command pulled out of storage the two Model 147Ds that the Air Force had bought for operations over Cuba back in 1962 and shipped them alongside three new three Model 147Es to Bien Hoa air base in South Vietnam. The RB-47s that worked alongside the Long Arm drones deployed to The Philippines.

The Model 147Ds were no-contrail Model 147C airframes with an added sensor for detecting SAM fuze signals. The Model 147Es carried the same sensor but used the Model 147B airframe.

SAC installed on both models a clever bit of technology. A “traveling wave tube” is a vacuum tube that amplifies radio frequencies. The command designed TWTs that broadcast the same signal that a U-2 returned when irradiated by a Fan Song radar.

Both drone types had one main mission. Locate S-75 batteries and capture their signals.

The Model 147Ds went first. They didn’t last long. The first mission on Aug. 20, 1965 ended with North Vietnamese forces shooting down the drone with gunfire. No opportunity to bait a S-75 battery.

The second mission, on Aug. 31, 1965, also ended with gunners on the ground shooting down the drone. Not that it mattered. The RB-47 suffered an equipment malfunction and couldn’t have received data from the Model 147D even if the drone had succeeded in baiting a S-75.

And with that, SAC had expended all of its operational Model 147Ds. The Model 147Es went next. Their first sortie took place on Oct. 16, 1965. The drone’s sensors and traveling wave tube failed 20 seconds after launch.

It went on to fly a leisurely loop around North Vietnamese air space. No S-75s engaged the unmanned aerial vehicle. “It wasn’t augmented and so didn’t look like anything the North Vietnamese wanted to waste a missile on,” Ryan Aeronautical contractor Dale Weaver explained. Unmolested, the drone parachuted to a safe recovery.

The second and third missions on Oct. 20 and Nov. 6, 1965 were more successful. Each ended with the drone’s destruction. But on both sorties the Model 147Es managed to capture some signals from S-75 batteries, although not the batteries’ fuzing signals.

The October mission came away with one incredible image. The Lightning Bug managed to snap a 35-millimeter photo of an incoming V-750 seconds before it exploded.

There was just one Long Arm Model 147E left. Ryan Aeronautical manager Bob Schwanhausser did some troubleshooting on the drone’s electronics and determined they were overheating. SAC briefly sent the Model 147E back to the United States for maintenance and upgrade.

On Feb. 13, 1966, the drone flew into North Vietnam, its radar reflector all but announcing its location to the S-75 batteries down below.

At least one V-750 arced into the sky. Finally, the Long Arm drone worked the way SAC and the CIA intended it to. The drone’s sensitive radio listening gear scooped up the V-750 fusing signal and relayed it to a supporting EB-66 electronic-warfare plane right before the missile blew the drone out of the sky.

It had taken nearly four years, but U.S. analysts finally had the data they wanted on the V-750’s fuse. Eugene Fubini, the assistant secretary of defense for research and engineering, described the February 1966 Long Arm mission as “the most significant contribution to electronic reconnaissance in the last 20 years.”

The U.S. Navy took the data from the Long Arm mission and passed it along to a company called Applied Technology. Three months later the California company installed the first AN/APR-26 radar-warning receivers on Navy fighters flying over North Vietnam.

It was an ingenious system. An array of postcard-size antennas detected the S-75’s various signals as well as signals from other air-defense systems. The AN/APR-26 alerted the crew three ways. A cockpit panel flashed warning lights. An alarm-clock-size, round T.V. screen flashed little line segments indicating the type of enemy sensor, the sensor’s azimuth relative to the targeted plane and the signal strength.

Finally, an alarm tone sounded in the cockpit.

The redundant warnings worked. Alerted by the AN/APR-26, crews could take evasive action and dodge incoming V-750s. Or, better yet, all-together avoid the S-75’s engagement zone. To meet exploding military demand for the radar-warning receivers, Applied Technology added 1,200 workers to its 200-strong payroll. Through 1966 and 1967 the company churned out 250 AN/APR-26s every month.

In a poetic twist, the Model 147H recce drone that flew its first combat mission over Southeast Asia in March 1967 boasted its own radar warning receiver. Detecting an approaching V-750, the RWR would trigger an automated maneuver. The Lightning Bug would pull a hard right turn, a maneuver Ryan Aeronautical believed would give the drone its best shot of avoiding the attack.

Order Drone War: Vietnam wherever you buy books. And listen to the podcast!

Peloton Sold a Dream, but Investors Are Waking Up

TopClassicNews - September 3, 2021 0
Peloton is a different company than the one investors bought two years ago in its public offering, and not necessarily a better one.Myriad...