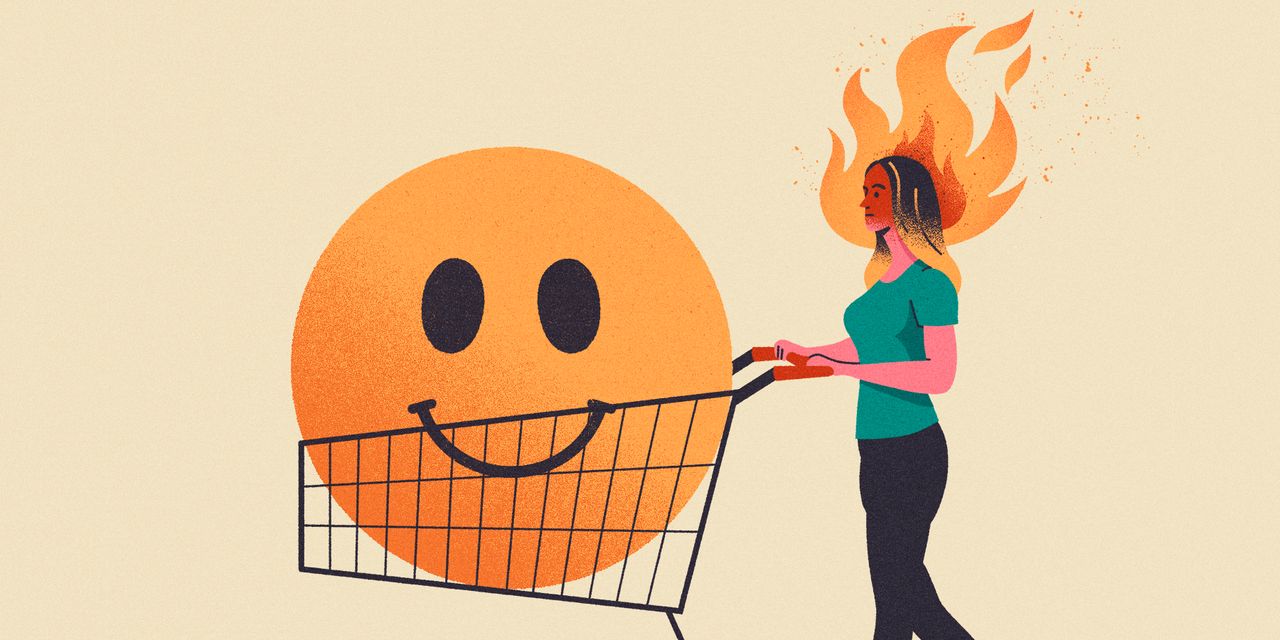 Burnout has a cost—a dollar cost.  In my own life, I’ve learned to recognize the physical cost burnout exacts: trouble talking about anything but work; difficulty falling asleep after hours glued to my laptop; my heart racing with every new ping from Slack.

And I’ve learned to notice the financial cost, too. While I’m not yet in full-blown, “I need a break” territory, I can already see the burnout buys staring back at me from my recent receipts: multiple mornings of deluxe breakfast sandwiches with all the pricey add-ons; the once-special but now-routine $25 bottle of chichi wine; and once, I’m red-faced to admit, a pair of glittery earrings designed to look like miniature charcuterie boards.

The young workers I talk to are especially vulnerable to the burnout buys. They are often the ones without families to support, so they are tasked with the late hours and promised the long-overdue promotion in exchange for an exacting assignment. But overspending when exhausted can be dangerous for a young person still building up emergency savings and other financial safety nets.

Recently I talked with a close friend of mine about her demanding work schedule. I’ve long known her to be someone who pours 100% into every avenue of life: work, play and beyond. But after a handful of years at a prestigious job, high-pressure projects, onerous deadlines and, of course, nearly two years of a global pandemic—the burnout finally hit her at age 29.

The burnout buys came for her, too. She loosened her budget, considering small extravagances she never before included in her budget: pricey “black cars” in lieu of Uber pools, regular takeout when she was too tired to meal plan, flashy spa retreats in place of a Groupon -discounted facial.

“It feels cheaper than quitting” the job that was causing her stress, she said of her new habit.

My friend isn’t the only one “paying” for her pandemic-exacerbated burnout. Shannon McLay, founder of the personal financial-services company Financial Gym, says she had seen this spending behavior from high-powered clients even before Covid-19 changed their lives forever. “We’re seeing this now because of pandemic issues, but I would tell people this in the past, too,” she says. “I’ve had multiple times in the last eight years where I’ve told people, ‘You need to quit your job because you are spending way too much money because you’re so unhappy at your job.’ ”

The spending uptick typically shows up in smaller purchases— Amazon splurges, phone upgrades and takeout habits—rather than in big-ticket items like houses and cars. In a way, Ms. McLay says, this makes the creep harder to see at first.

How has work burnout affected your spending habits? Join the conversation below.

“They’re buying things to feel whole,” she says. “Those kinds of things get justified—$50 here, $100 there. You think, ‘I’m rewarding myself because I work so hard. I deserve this.’ It gets said more and more when you’re unhappy at work.”

In the past, some young workers have soothed themselves with the “work hard, play hard” approach. Jobs can feel grueling, but they also afford workers a certain kind of lifestyle, allowing people to spend money on entertainment, travel and other luxuries.

In a new era of work-from-home and social distancing, however, the “play hard” has vanished, leaving exhausted employees with only the “work hard.” Meghan O’Dea, a 35-year-old editor and writer soon relocating from Tennessee to Colorado, told me that after years of freelance work and startup culture, she decided to re-evaluate where this lifestyle benefited her, and where it sapped her energy.

She has learned to watch for the signs of burnout the tough way: exhaustion, insomnia and trouble finding joy in the activities and hobbies that once invigorated her. She sees the effects in her spending, too—when she’s most unhappy at work, she notices she’s willing to spend more for convenience and shortcuts, just like my close friend described.

“Any of these moments when I’ve flirted with burnout or pushed through burnout, that is when I’m spending a ton of money on eating out,” she says. “I don’t have energy to cook for myself, even though cooking is something I enjoy.”

Getting past the blues

Digging your way out of burnout is a tall order. While some throw up their hands and leave the jobs wringing them dry, others wistfully thumbs-up posts from members of the Great Resignation. Many—like my friend and Ms. O’Dea—can’t afford to commit to such a big shift, or they feel that forgoing benefits and savings isn’t a trade-off they are yet willing to make.

Cynthia Meyer, financial planner and founder of Real Life Planning, recommends saving money for burnout in advance, as dark as that may sound. In the future, should you find yourself in a situation where you’re seeing the signs of exhaustion and unhappiness, you’ll be able to hit the eject button.

“Build up those cash reserves so you have the ability to leave a job in the future,” she says. “I often encourage people, if they’re thinking about leaving their work at some point before normal retirement, to have a year of cash and short-term investments.”

Ms. Meyer also recommends creating a “splurge” fund—this allows people like my close friend to spend a certain amount every month without guilt. Alongside that account, create a parallel goal, this one for savings and investments. Setting a concrete number helps her clients stay motivated when all else seems to be falling apart.

Reviewing my own list of recent burnout buys, I discovered I wouldn’t have felt so embarrassed by my impulsive purchases if I had learned to label the splurge fund as such. As it was previously, I added every new item to my cart as though I was sneaking behind someone’s back (turns out, only my own). By being upfront with myself about how much I could allow for such little luxuries, I realized I could have had my miniature charcuterie earrings without the side of guilt.

“Sometimes it’s hard to know the spending is related and tied to job dissatisfaction. When you’re in the middle of it, you don’t realize how much you’re spending,” Ms. McLay says. “If you’re regularly tracking expenses, you can see the uptick, and it’s usually directly aligned with the feelings you feel around your job.”

As the Delta variant continues to affect the economic recovery, many young people find themselves re-evaluating their career goals. Suffering from burnout can, in a grim way, illuminate what’s been amiss all along and point toward big, life-changing choices: finding a new job that doesn’t ask as much of you; taking time off, ultimately hoping to recover from burnout; reassess what else is contributing to the burnout, such as time spent in lockdown.

“I’ve come off four years longer where ‘work hard, play hard’ was my mantra,” Ms. O’Dea says. “I was enchanted with ‘rise and grind’ like a lot of people were, and I felt a lot of pressure to make a lot of gains early in my career. Most of my life has revolved around work and now, I’m trying to look more holistically.”

Ms. Carpenter is a reporter for The Wall Street Journal in New York. Write to [email protected].

TopClassicNews - September 11, 2021 0
James Wan could have spent $40 million in studio money for a movie co-written by his wife Ingrid Bisu (along with Akela Cooper) made...