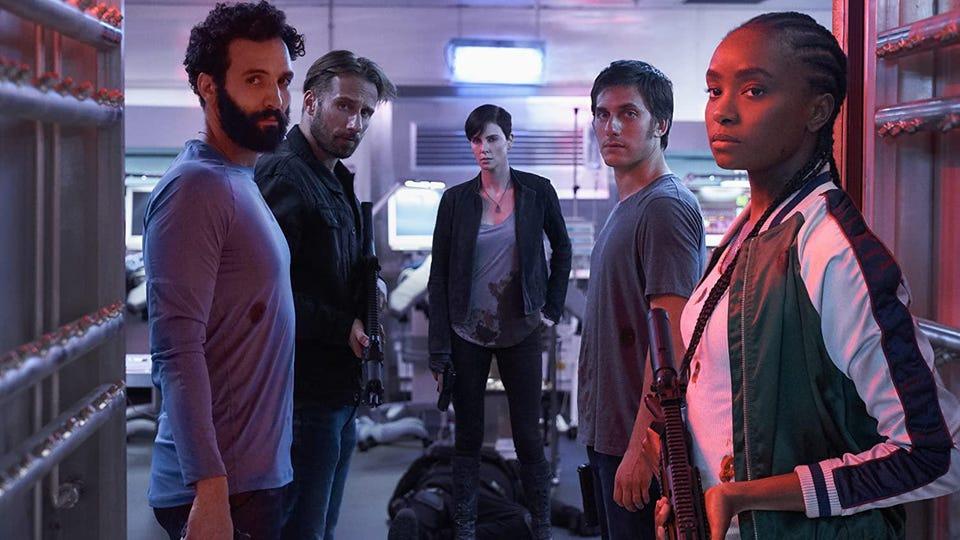 “Don’t spend your entire first film setting up the sequel,” unless you’re Netflix and folks are going to click “play” anyway.

Deadline is reporting that Victoria Mahoney has been hired to direct Netflix’s The Old Guard 2. This comes a year after The Old Guard debuted to decent reviews, solid buzz and strong viewership (a reported 78 million households). Directed by Gina Prince-Bythewood (who passed on the sequel and is busy with Sony’s Viola Davis/Thuso Mbedu drama The Woman King), the adaptation of the Greg Rucka/Leandro Fernández comic book series about a group of immortal mercenaries starred Charlize Theron, Kiki Layne, Matthias Schoenaerts, Marwan Kenzari, Luca Marinelli, Veronica Ngo and Chiwetel Ejiofor.

That we’re getting an Old Guard sequel is itself ironic.

The franchise apparently survived breaking the most vital rule of franchise-building. The $70 million, R-rated actioner is indeed a feature-length prequel for “the real story.” As noted last year, the Skydance-produced film is mostly set-up for a new status quo whereby Theron and her team (including a new recruit played by Layne) will now be advised and assisted in their “save the world” ways by Chiwetel’s former adversary.

The crux of the film is that our heroes feel like they haven’t made any real difference in their centuries roaming the Earth. The last-minute reveal that they totally have made the world a better place positions the sequel to be a kind of A-Team, but with ass-kicking Highlanders flick. The movie we got is mostly focused on past-tense exposition and world-building, with a structure closer to a television pilot than a stand-alone film. That’s often par for the course in too many modern franchise-starters, starting with (at least in modern times) Remo Williams: The Adventure Begins.

It would become a popular gimmick after Bryan Singer’s X-Men (which got away with it because the very idea in seeing a halfway decent X-Men movie was an event unto itself). This was followed by the likes of Robin Hood (2010 and arguably 2015), Charlie’s Angels (2019), Jem and the Holograms (which cruelly teased a Misfits-centric sequel that we all knew was never going to happen), Warcraft, The Man from U.N.C.L.E.,  Artemis Fowl and three different Fantastic Four movies (1996, 2005 and 2015).

I’m still annoyed about the post-credit tease for Joss Whedon’s Justice League which previewed a Legon of Doom/Injustice League movie that’s never going to happen. Save for X2 in 2003 and The Rise of the Silver Surfer in 2007, none of these got sequels. To be fair, the 124-minute The Old Guard did give you plenty of what you came to see, namely Theron and company kicking ass, killing faceless bad guys and looking pretty damn cool while doing it.

And while I have issues with the movie as a movie (it’s a classic example of Netflix granting big budgets but looking cheap due to copious upfront salaries), I was also annoyed by the cliffhanger because the new status quo seemed more entertaining than the “origin story” stuff we got. It was unlikely even with the huge viewership that we’d get a sequel. After all, it’s been four years and Bright 2 is still no closer to happening.

Even in terms of the first sequel serving as set-up for the threequel, that only (theatrically) worked for Jurassic World: Fallen Kingdom, which set up Jurassic World: Dominion’ s “dinos live among us” status quo after Jurassic World had earned $1.671 billion. It also worked for the VOD/DVD Skyline franchise, which actually gave us the “now we take the fight to the aliens” threequel that Independence Day: Resurgence and Pacific Rim: Uprising only teased.

But in terms of “part one” movies that act as feature-length prologues, especially not counting reboots of already popular franchises (Casino Royale, Batman Begins, Star Trek, etc.),  I’d argue The Old Guard is the first true-blue success since the aforementioned 2000 X-Men movie. Moreover, obviously, the film would have absolutely struggled in theaters, with too few folks being willing (pandemic or no pandemic) to drive to the theater and buy a ticket for a new-to-you star-driven action fantasy flick.

We claim to love Theron, but Atomic Blonde barely cracked $100 million and nobody showed up for Aeon Flux. This is the Netflix/streaming advantage. Audiences are more willing to click on a “new to you” movie with a well-liked movie star and a good elevator pitch when it’s “free” on a platform they already pay for and when it doesn’t require them to leave the house.

Mark Wahlberg’s Spenser Confidential (another glorified TV pilot disguised as a movie) likely would have struggled in theaters, but its Netflix release (admittedly right before the Covid lockdowns began) nabbed 86 million households.

Chris McKay’s The Tomorrow War is the best blockbuster-y movie of the summer (unless you count Shang-Chi as a summer release). However, the original, high-concept Chris Pratt vs. aliens actioner would have struggled as a theatrical release. Skydance sold the film to Amazon for $200 million and now we may get a sequel.

The good news is that we’ll get an Old Guard movie that seemingly delivers on the promises of its cliffhanger.

Mahoney’s hiring means at least one very good thing that came from The Rise of Skywalker. All credit to J.J. Abrams for hiring her a the second-unit director (after he called Ava DuVernay and asked who she thought deserved a shot). That is frankly what you want to see from those high atop the ladders of power and influence.

News that The Old Guard 2 may be more than theoretical is another example of how the streamers can break rules and get away with certain infractions in a fashion that would usually bury a conventional Hollywood movie. I hope it doesn’t lead to more “first movie as prequel” flicks, both in theaters and online. I mean, “twice in 20 years” is still not a good batting average.

China’s Property Market At The Brink: Not A Lehman Moment But An Economic Threat

Calls for Cuomo to resign ramp up after the NY governor...

TopClassicNews - March 7, 2021 0
Andrew Cuomo said he won’t resign over the accusations of sexual harassment against him. Five women have now accused the New York governor of inappropriate...