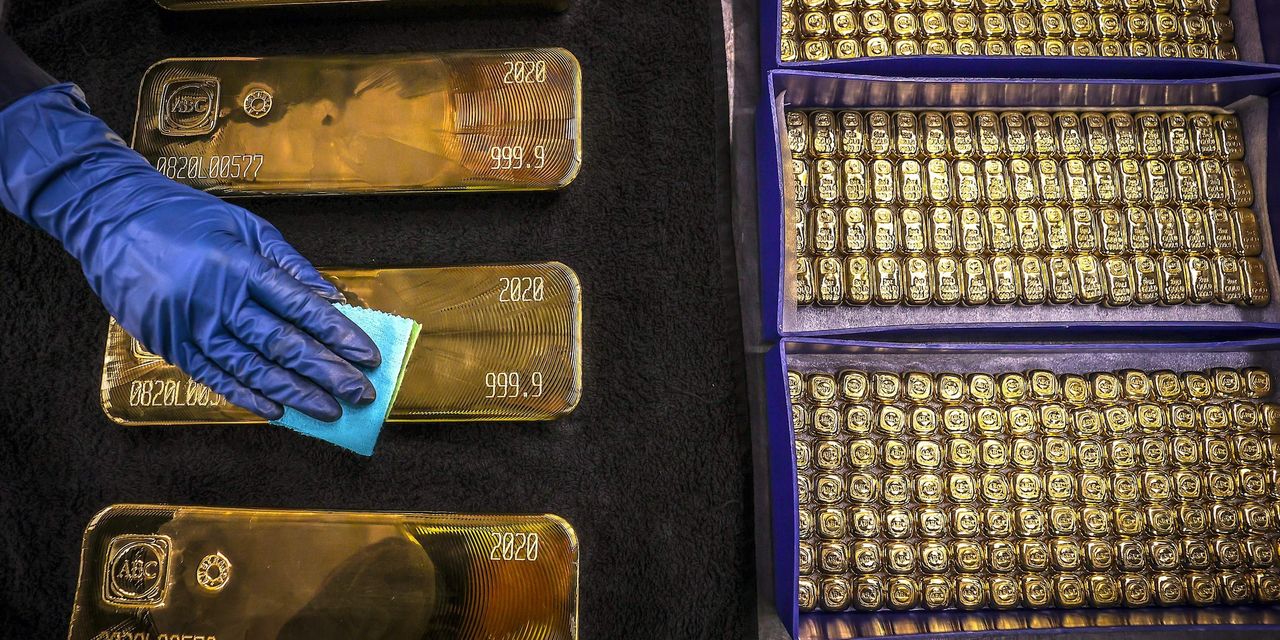 Prices for the precious metal slipped after data showed new U.S. weekly jobless claims fell by 38,000 for the week ended Oct. 2 to 326,000. Economists polled by The Wall Street Journal had estimated a fall to a seasonally adjusted 345,000.

The better-than-expected economic data came ahead of Friday’s nonfarm-payrolls report, which will inform the Federal Reserve’s decision to taper its bond buying, analysts said.

“Gold has essentially been a battleground for bulls and bears this week with conflicting themes pulling and pushing the metal in a relatively narrow range,” said Lukman Otunuga, senior research analyst at FXTM. “The choppy price action illustrates the growing struggle for power ahead of the key jobs data.”

“Given how gold remains quite sensitive to taper expectations, real yields and dollar direction, the report’s outcome should set the tone for the precious metal” for the rest of October, he said in emailed comments.

A weaker dollar can make assets priced in the currency more attractive to overseas buyers and steadying yields lower the opportunity costs of owning gold, which doesn’t offer a coupon, versus yield-bearing debt.

For the week, gold is little changed for the week, while silver is on pace for a 0.5% rise thus far in the period. The ICE Dollar index, meanwhile, is up 0.1%.

Ahead of Friday’s U.S. nonfarm-payrolls report, data on private-sector employment from payrolls company Automatic Data Process on Wednesday came in above forecasts at 568,000 in September. Economists polled by The Wall Street Journal had expected a gain of 425,000 jobs.

“A strong report by ADP signaled that the labor market performed relatively well last month, and hence the Fed is likely to move ahead and start its tapering process next month,” wrote Naeem Aslam, chief market analyst at AvaTrade, in a daily research note.

“When interest rates rise, the opportunity cost of holding the non-interest-bearing precious metal increases, and hence, when investors get rid of their exposures to the yellow metal, gold prices are likely to dip. This is why tomorrow’s payroll data is important for gold,” the analyst wrote.

India’s Fears Of A ‘Taper Tantrum’ Have A History Problem

TopClassicNews - January 25, 2021 0
Raghuram Rajan, Governor of Reserve Bank of India, after the 555th Central Board meeting at RBI … office, where he said that RBI...