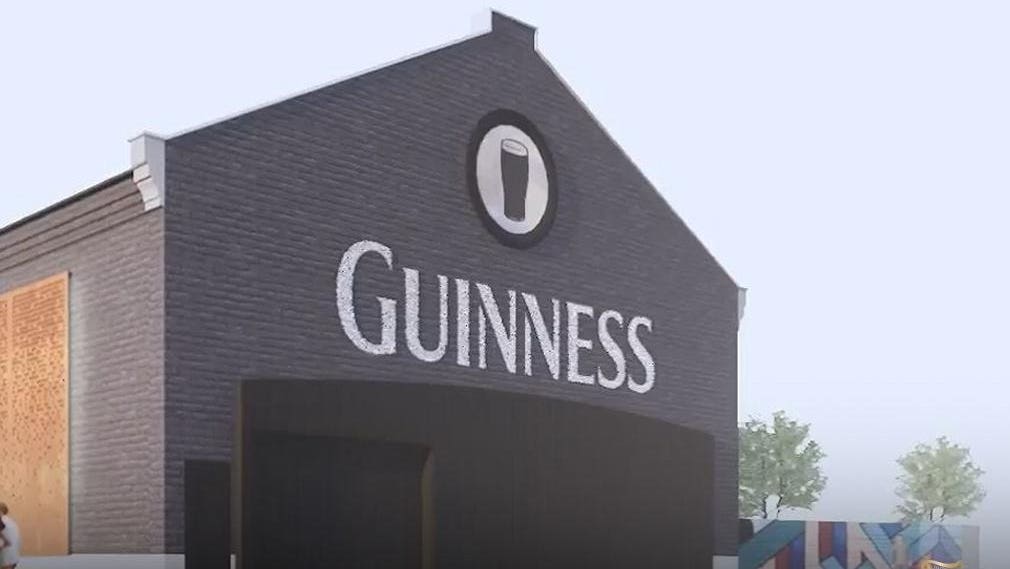 Guinness has just announced the launch of a 15,000-square foot, community-driven taproom in Chicago’s Fulton Market.

It is the second location of new neighborhood ‘hub’ concept the Diageo-backed beer brand will be rolling out across the United States.

Ground will break this fall, with an expected opening date of St. Patrick’s Day 2023. Fitting—“St. Patrick’s Day is a really, really big deal for us,” says Jay Sethi, Diageo Beer Company’s Chief Marketing Officer. The brand also played a role in the surprise dyeing of the river last year.

In 2018, Guinness launched its first American outpost in Baltimore, Maryland. Since opening, the taproom-slash-brewery has welcomed over 900,000 visitors and turned out 250 small-batch brews.

While the Chicago property will boast beer-brewing capabilities, Guinness’s signature stout won’t be made on location. Instead, the brand will be focusing on new experimental and one-off beers, all made via a 10-BBL brewing system. Small-batch beers will be served in the full-service, 300-seat restaurant inside the long-vacated Pennsylvania Railroad Depot. The property will create 75 new jobs in taproom operations.

“Chicago is a really special city,” says Sethi, a Chicago native, via phone. “It’s one of the biggest markets in this country and our second biggest market nationally.” He notes the brand will be partnering with local chefs and artists to make brews reflexive of local communities, like a Mexican-influenced beer inspired by the Pilsen neighborhood.

Both taprooms mark a big push towards on-premise after a year that has completely upended the bar and restaurant scene. “We believe that on-premise will come back,” says Sethi. “In many ways it already is, and it’s our responsibility to contribute to it. To demonstrate that, we’re making significant investments into our Chicago and Baltimore communities.”

The brand is building the West Loop property from the ground up, allowing them to consider full safety accommodations. “We’ve learned a lot in the last year on how to do a taproom well in terms of safety and logistics,” says Sethi. “How to make people feel like they have the right safety accommodations in terms of space, sanitation, logistics, menu ordering, and more. We’ve gotten really good at this in the last year.”

Both the Baltimore location and the forthcoming Chicago stronghold for the beer brand will be heavily focused on partnering and integrating into the local communities.

“In Baltimore, we have made a million-dollar commitment to the city, to help different economic initiatives,” Sethi continues. “What I’m most proud of is a series of beers we did with diverse, creative, talented people that the city would love – like Black is Beautiful [a collaborative initiative in the brewing industry to bring awareness for racial injustices. 100% of the beer’s proceeds go towards local foundations that support police brutality reform].”

“With Chicago, we want to build on what we’ve started in Baltimore,” Sethi notes, “Which is to come into a city with the right spirit, be good neighbors, and collaborate with folks around the city. We want to find local partners to do things for the city itself. Chicago is the first step in this.”

“The other thing that I wanted to highlight from Baltimore is that during the pandemic, there was a moment where we couldn’t make as much beer for all the reasons you could imagine,” says Sethi. “So we started to make bread with the resources we had and the people we employed. To combat food scarcity, we made over 50,000 loaves for Baltimore food banks. We’re going to build a bakery so we can continue this in Chicago.”

“Essentially,” says Sethi, “the entire ethos of how we approach Chicago is centered around how we can be a good neighbor and how we can honor the city.”

What did you think of this article?

Thank you for your feedback!

Would NBCUniversal And WarnerMedia Be Better Off Together?